The aim of individuation requires that one should find and then learn to live out of one’s own center, in control of one’s for and against. And this cannot be achieved by enacting and responding to any general masquerade of fixed roles.  ~Joseph Campbell, Myths to Live By

A person with a well-differentiated “self” recognizes his realistic dependence on others, but he can stay calm and clear headed enough in the face of conflict, criticism, and rejection to distinguish thinking rooted in a careful assessment of the facts from thinking clouded by emotionality. Thoughtfully acquired principles help guide decision-making about important family and social issues, making him less at the mercy of the feelings of the moment. What he decides and what he says matches what he does. He can act selflessly, but his acting in the best interests of the group is a thoughtful choice, not a response to relationship pressures. Confident in his thinking, he can support others’ views without being a disciple or reject others’ views without polarizing the differences. He defines himself without being pushy and deals with pressure to yield without being wishy-washy.  ~excerpt from The Bowen Center (Differentiation of Self)

What does it mean to individuate?  How is it related to self-awareness?   Is it even necessary?

Individuation is a term used originally by Carl Jung.  According to Jung, it is a process in which the individual Self develops out of an undifferentiated (i.e. still connected to familial and social norms and conditioning) unconscious.  It is seen as a developmental psychological process during which innate elements of personality, the components of the immature mind, and the experiences of the person’s life become, if the process is more or less successful, integrated over time into a well-functioning whole.  It is a process that begins as early as the age of two and continues on throughout our lives.

In short, individuation is our ability to know our own minds.  To not be ruled by our unconscious (which includes our social and familial conditioning).  To be able to think for ourselves, to understand what motivates us to do the things we do, to be able to hold our own thoughts even when they are unpopular or go against the current “norm” (while also being open to reason and logic and other ways of thinking and doing).

To be “individuated” is directly related to being self-aware.  Through the process of becoming more self-aware we are able to individuate more.  It is a life long journey.  We do not “arrive” or become fully individuated 100% self-aware – there will always be layers to the unconscious for us to unearth, unravel, and integrate or dislodge.

It is the process of unearthing, unraveling, sifting, unlearning, and reclaiming all the messages we have been given since (perhaps before) birth.

It is the process of releasing our stories of too much, of not enough, of shame.

It is the process of learning to sit in discomfort, in the unknown, in the in-between.  The ability to look at the shadow and not only the light aspects of who we are.

It is owning all of who we are.

In terms of survival of the human species, individuation is not necessary.  We don’t need to do this to live. It is not a basic human need.  In could be argued that it may be a part of our evolutionary process, and even so, it is not necessary. 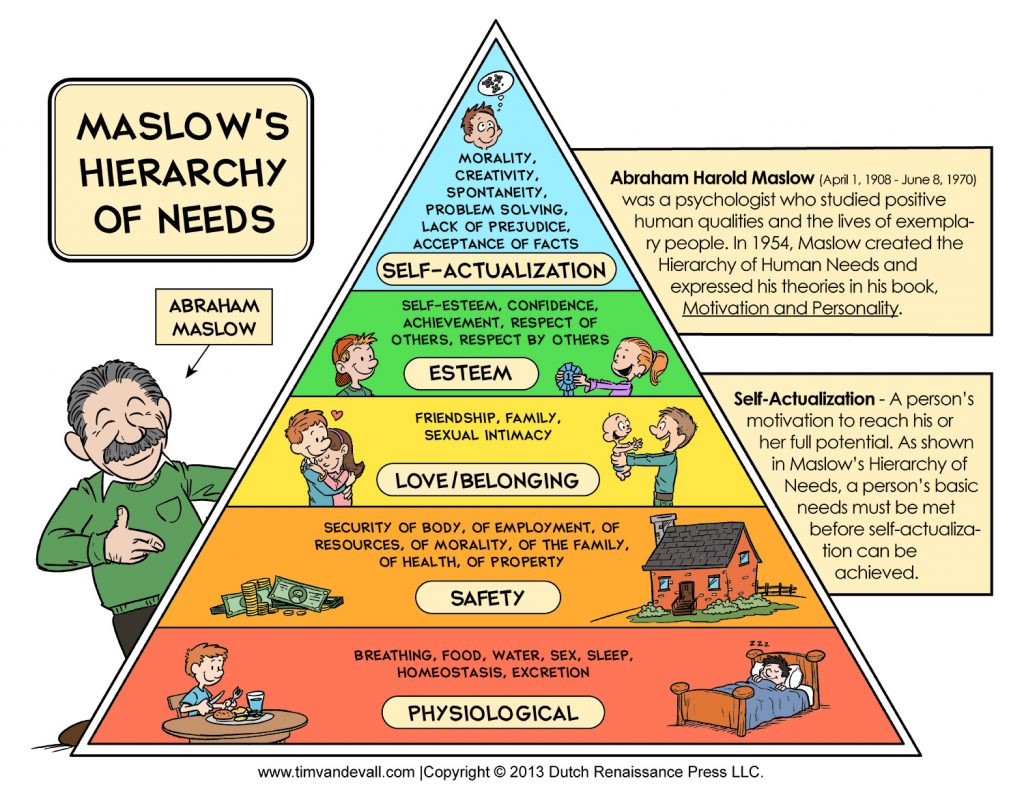 When we look at Maslow’s Hierarchy (right), individuation (what Maslow calls “self actualization”) is that the “top” of the pyramid.  This implies that it cannot be achieved unless the other needs are met.  As in, if you do have stable sources of food and shelter, you aren’t going to be working on “self-awareness” – you’re going to be working on finding stable sources of food and shelter!

We do not need self-esteem or self-actualization in order to survive.

I would argue that in order to thrive, we do need those two “upper” levels.

I talk more about this in the 15 minute video below.

This essay and video series is in part to share with you the topics we’ll be unearthing, unraveling, and unlearning in the six month circle Becoming Unleashed.  We begin September 22.  If you are interested, you  can learn more and request an application here. xoxo

To read the other essays and view the other videos in this series, click the links below:

The Goo as Revolution

Self Actualization in Community