I have said many times and I am sure will say many more, that my daughter is one of my greatest teachers. My son is proving to be one of them too.

From my daughter I have learned perserverance, rule-breaking (again), unconditional love, that the “authorities” don’t always know what they are talking about, and that deeply feeling one’s emotions–all of them–is the way to find true connection: to one’s self, to those we love, to the world. She has also taught me about creativity and individuality and what it really means to be a rebel.  And her greatest lesson to me: You can never be fully prepared for what life has to offer.

She’s patiently taught me these lessons since she was in utero–when we were told at seven weeks pregnant she probably wouldn’t make it; when my water broke at 34 weeks and we hadn’t yet put together her changing table or even packed our hospital bags. She has been at least five steps ahead of me for the last seven plus years and by knowing her and mothering her I believe I have become a better person, coming closer and closer to the person I am meant to be, called to be.

I expected a similar pregnancy with our son: one filled with scares and unknowns. We (myself, husband and medical team) expected him to arrive early, like his big sister. I spent the first half of my pregnancy holding my breath, waiting for the other shoe to drop, waiting for the bad news and obstacles, and yet they didn’t come.

My son is teaching me patience and to truly embrace each new day as it comes without expecting the worst, allowing space for the best. He has taught me to love my body again, its working parts and non-working parts. And his greatest lesson so far: settling into the becoming, the inbetween, the almost.

I’ve been pregnant more than three weeks longer with him than I have ever been before. I’m learning the nuances of aches and pains and contractions. I’m learning to embrace the uncomfortable: not only literally being uncomfortable because I have a 20 pound bowling ball of fluids and new organs and baby where my stomach and intestines once sat or because my hips and pelvis are spreading in ways I can’t believe are actually natural. No, the real discomfort is in the not knowing, the inability to plan, the wanting him here already and having to release any sense of control I may think I have to make that happen now.

He’s forcing me to rest in this place of almost: Almost a mama of newborn; almost the mama of two; almost the mama of a son; almost a family of four; almost stepping into this next iteration of my, our, life. I don’t know when BabyBoy is going to decide to enter the world and so all plans we make now are consciously tentative, made with the caveat of “unless he decides to make his appearance before then.”

The reality is all our plans are tentative, whether we acknowledge that consciously or not. A million different things can happen to change our course, from the big and dramatic changes like the birth of a child or the death of a loved one, to the more minor, everyday things like coming down with a cold, or a car breaking down. Life happens, and we can plan all we like, and yet the reality is we don’t have control.

So we are all living in this space of almost in many ways, in this space of constantly becoming. We make our plans and have our dreams and go through our lives. And how we deal with the changes in course, I believe, speaks volumes of who we are, who we were and who we will become. Do we resist and fight and demand the illusion of control, or do we step into the moments, embracing the pains and pleasures as they come to us?

I say we all do a bit of both resisting and embracing. I know I do.

When I sense the resistance however, when I become aware that I am fighting something I have no power or control to change, I breathe. I step into my body-centered mindfulness practice. I become curious about why I am so resistant, what is the fear behind the fight, behind the temper-tantrum. (And it’s always a fear that lingers there, trying to keep me safe, trying to keep me from shining.) What am I ready to release, what is the lesson that is sitting here for me to see, to breathe into? 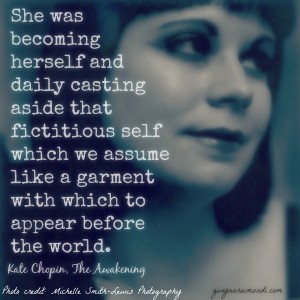 Over the last week or so I have had more than a few temper tantrums. I have told BabyBoy he won’t get any birthday parties if he doesn’t make his appearance soon. I have been snappy and mean to my daughter. I have been angry that we aren’t moved into the next step of our lives. We have been ready for weeks now, with hospital bags packed and in the trunk of the car; infant supplies all procured; feelings of readiness and anticipation over-analyzing every twinge from my uterus, every mood shift, every food craving. I have researched every possible way to naturally induce labor and tried many of them.

I have tried to push us forward, when the lesson is to sit back and release and allow life to unfold as it is meant to. To open space for the becoming, to be in the being now: this almost, this “in-between.” I fall back on my breathing and body-focused mindfulness practice and explore my fears and hesitation and embrace this little boy and his lessons for me, allowing more space for the unknown and the almost. And knowing I cannot plan for tomorrow, I allow myself to live in today.

To celebrate BabyBoy’s eventual entrance into the world, I have revamped my self-study program Savoring Sensuality and am offering it at a 30%+ discount. For more information and to register, click here.